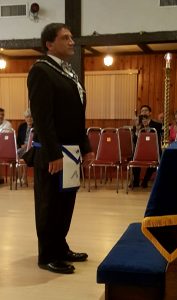 Installation:
The evening began with a cocktail hour which included mozzarella sticks and chicken tacos followed by a sumptuous buffet style dinner catered by Follow The Food, LLC which is run by Ian and Nadine Staley. The menu included a garden as well as a mixed green salad, fresh rolls, roasted Cornish hens,  Marinated skirt steak, shrimp scampi, roasted red potatoes, fresh corn-on-the-cob, green beans and spaghetti. The installation began promptly at 8 after everyone had enjoyed their meals. At the end of the installation, Brethren and guests partook of a splendid layout of apple crumb cake, strawberry short cake, fresh fruit tort and vanilla ice-cream as well as tea and coffee. Everyone enjoyed the company and conversations kept going out into the parking lot. 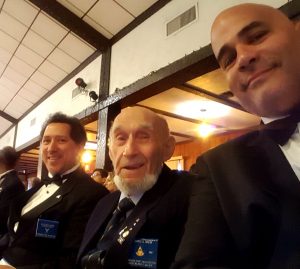 The officers would like to thank all the Brothers who helped on Sunday for the setup of the Lodge for the installation as well as the break-down at the conclusion of the installation. A big thanks also go to Irene Wierzbicki President of the Polish American Cultural Association for all of her help and assistance during the planning and execution of the installation as well as assisting Leon Jankowski bar-tending during the evening. Also to Ian and Nadine for their attention to detail and providing the Lodge with a phenomenal dietary banquet, looking forward to many more in the future.